In face of new regulations and fluctuating fuel prices, the innovative new MAN B&W ME-LGIP de-risks your investment and lets you take back control.

By switching to LPG, you achieve full compliance with all SOx regulations and get a competitive edge of up to 18% less CO2 emissions, with no loss of performance or efficiency. You also retain the flexibility to use conventional fuels that will allow you to position your asset competitively regardless of market conditions. 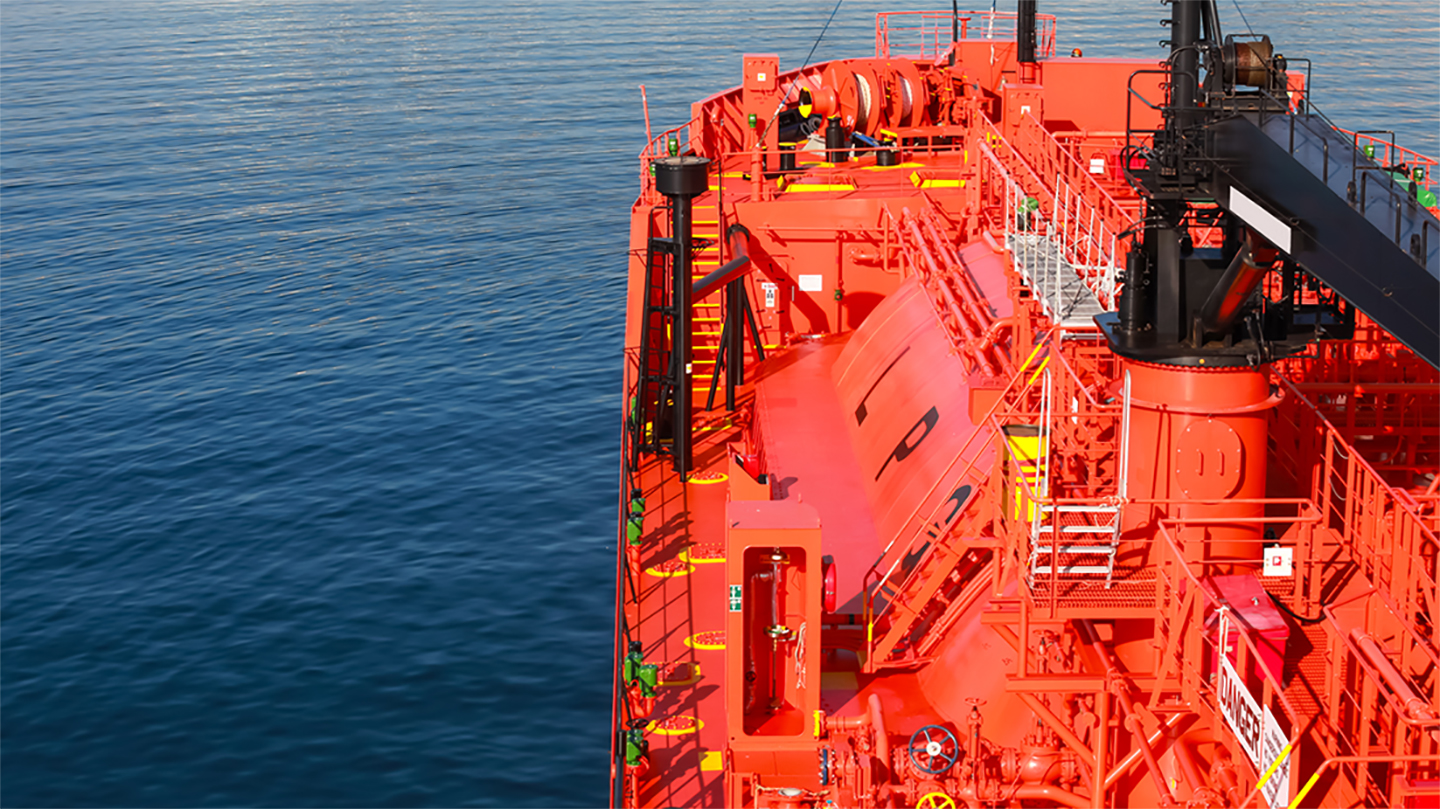 LPG gives you greater financial security; it is traditionally a cheaper fuel than HFO yet delivers the same performance and efficiency.

Using our dual-fuel engine technology, you can also take advantage of fluctuating fuel prices in the future. Importantly, the ability to use LPG cargo as a fuel source provides significant cost savings for LPG Carrier owners or charterers, including reduced time and fees for fuel bunkering.

Switching to LPG helps to support operational continuity. As a widespread energy source, availability is high and LPG is easier to store and handle, compared with cryogenic gaseous fuels.

The ME-LGIP is the only liquid gas injection dual-fuel engine on the market that allows you to switch between conventional VLSFO, MGO and LPG fuels with no loss in performance and efficiency. Based on the market leading ME-C engine with uncompromising quality standards, the MAN B&W ME-LGIP delivers the long-term reliability you need, with simple installation and minimal maintenance requirements.

Proven fuel for a proven platform 100
%
LGP boosts operational continuity as it is widespread and easy to handle.

LPG as a bunker fuel

Our proven MAN B&W ME-LGIP engine uses dual-fuel engine technology that lets you take advantage of fluctuating fuel prices. By using LPG cargo as a fuel source allows for significant cost savings for the owners or charterers which also includes reduced time and fees for the bunkering. As additional benefit, LPG is easy to store and handle compared to cryogenic gasses.

Listen to our customer BW LPG’s statement regarding LPG as a bunker fuel.

Use of LPG for other ship types than LPG carriers

There are many good reasons to use LPG as a marine fuel for other ship types than LPG carriers.

LPG is a sulphur-free fuel type which makes compliance to emissions regulations easy by nature. It is widely available and also offers benefits with regards to lower fuel prices and reduced CO2 emissions.

Watch our customer BW LPG to find out more about this.

The use of LPG are a marine fuel offers many advantages. The MAN B&W ME-LGIP engines allows operational security and flexibility to switch between conventional fuels and LPG according to your needs and current market conditions.

Tune in and watch our customer BW LPG share their experience with MAN as primemovers for LPG two-stroke engines and also highlight the benefits of this fuel type. 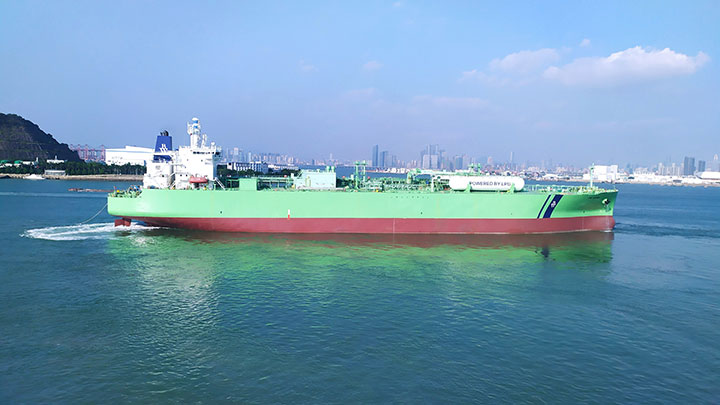 Power into the future with confidence

There are many ways in which the new MAN B&W ME-LGIP dual-fuel LPG engine can help drive long-term profitability and security for you fleet and business. Contact us today to start exploring your options.
Contact us

MAN PrimeServ, MAN Energy Solutions’ after-sales division, has announced the successful conversion of the main engine aboard the LPG carrier, ‘BW Gemini’, from an MAN B&W 6G60ME-C9.2 type to an MAN B&W 6G60ME- LGIP dual-fuel type capable of operating on fuel oil and LPG. The BW Gemini is part of the fleet of Oslo-listed BW LPG – the world's leading owner and operator of LPG vessels.

The successful conversion – and start of gas and sea trials – will make the BW Gemini the world’s first commercial vessel to be propelled by a two-stroke LPG dual-fuel engine. The conversion is the first of 12 ordered by BW LPG for a series of vessels in its fleet.

BW LPG chose retrofits over newbuildings for a number of reasons. Pontus Berg, Executive Vice President, Technical and Operations, LPG, said: “Retrofitting allows us to minimise our carbon footprint – the process emits up to 97% less carbon dioxide compared to a newbuilding construction. Retrofitting also means that we do not add additional tonnage that the world does not need. In addition, BW LPG’s fleet is already widely recognised amongst charterers for its efficiency, and so retrofitting 12 of its vessels to dual-fuel LPG would help to further reinforce the company’s strong reputation in this area.”

Dr Uwe Lauber, CEO of MAN Energy Solutions, said: “The industry is moving towards a zero-carbon future and there is a strong global push towards sustainability. As we pass the 2020 sulphur cap and get closer to future IMO targets in 2030 and 2050, companies that show strong corporate commitment to sustainability will become more commercially attractive. In this context, this retrofit project represents an important milestone and case study for the future of our industry.”

Wayne Jones OBE, Chief Sales Officer and member of the Executive Board, MAN Energy Solutions, said: “MAN PrimeServ’s dual-fuel expertise helped BW LPG to get a clear picture of the economics involved in this ambitious retrofit project. Although it requires significant upfront investment, the returns will be positive in both financial and environmental terms, and showcase perfectly BW LPG’s commitment to action on sustainability. It also displays the adaptability of MAN Energy Solutions’ technology and how retrofitting our engines can future-proof them to handle whatever alternative fuels come to prominence in the decades ahead.”

MAN Energy Solutions announced the first four BW LPG retrofit orders for its new MAN B&W ME-LGIP LGP-powered engine in September 2018 in advance of the official launch of the engine at its Research Centre Copenhagen, and exchanged the contract publically with BW LPG during the event.

Subsequently, in February 2020, the type approval/parent engine test was performed at licensee STX works in Korea with the TAT approved by all classification societies.

The BW Gemini docked at Yui Lian Ship Yard in Shenzen, China in early August 2020 for conversion. Due to pandemic restrictions, the MAN PrimeServ project team collaborated in great part remotely to push the conversion forwards.

Sea trials are scheduled for October 2020 with the LPG carrier due to re-enter commercial trading upon their successful completion.

With LPG as a marine fuel, the BW Gemini’s output efficiencies rise by around 10% against fuel oil, which will in turn generate notable gains in total voyage fuel-economics. This, along with other advantages, secures LPG’s position as a long-term, sustainable marine fuel.

Cost-wise, LPG is also a better option than compliant fuel oil, with high lifetime savings prospects. By leveraging LPG as a marine fuel, BW LPG’s vessels benefit from savings due to lower fuel consumption and full dual-fuel flexibility, which guards against price sensitivity to post-2020 fuel price fluctuations. Furthermore, the ability to use LPG cargo as a supplemental fuel source also reduces time and fees for fuel bunkering.

MAN PrimeServ contributed a vast amount of dual-fuel technology knowhow, which, in combination with BW LPG’s own substantial experience in the gas-shipping business, meant that the initial business case could quickly be formed, and the project approved.

MAN PrimeServ’s research showed that  a retrofit would be the most environmentally friendly solution. A retrofitted vessel generates 35 times less CO2-emissions compared to a newbuild vessel; and compared to 2020-compliant fuels, using LPG as a fuel would reduce SOx by 99%, CO2 by 15%, NOx by 10%, and particulate matter by 90%.

Jens Seeberg, Head of Retrofit & Upgrade, MAN PrimeServ Two-Stroke, said: “This is an exciting project that has involved many parts of MAN Energy Solutions’ worldwide organisation. Our Retrofit Department in particular has enjoyed cooperating with BW LPG, which has been very open during the entire process. As we push towards a maritime energy transition, new fuels and technology are beginning to impact the market and there is no doubt that retrofitting engines already active in the field will become more and more commonplace in time.”

BW LPG is the world's leading owner and operator of LPG vessels and currently owns and operates 51 Very Large Gas Carriers (VLGC) and Large Gas Carriers (LGC) including two VLGC newbuildings with a total carrying capacity of 4,159,213 CBM. With four decades of operating experience in LPG shipping and experienced seafarers and staff, BW LPG offers a flexible and reliable service to customers. With a global presence in nine countries, BW LPG operates out of Singapore and is incorporated in Bermuda.