Thanks to state-of-the-art technologies and solutions, climate protection and energy efficiency have become main features at MAN Energy Solutions production sites as the company continues its pursuit of ambitious carbon reduction targets. One project in Frederikshavn, Denmark, is a model of ingenuity in sustainable production, using a recovery system to feed surplus energy and waste heat from their test benches into the local district heating network.

On the dark-blue tank outside the MAN Energy Solutions site in Frederikshavn, Denmark, a huge poster sums up one of the company’s most ingenious solutions for increasing resource efficiency and sustainable production – it reads: “Our Testing Warms You Up”. Frederikshavn, a seaport town known for its plaice and its bid to be 100 percent renewable by 2030, is where MAN Energy Solutions assembles and tests its compact, high-speed MAN 175D marine engines. Usually, exhaust gases and surplus electricity generated during testing in facilities like this one would go to waste, but here the six test beds instead feed the local district heating system, providing some 1,500 houses with heating and hot water.

The combined heat and power (CHP) project, implemented in 2015, has become a success. The production site has reduced its carbon dioxide (CO2) emissions by more than 5,000 tons per year, and within six years the project has paid itself off by delivering hot water to the town’s supplier. “In the end, we actually save in production costs,” says Kim Nørgaard, Head of Production and R&D at the Test Center Frederikshavn. Here’s how it works: Located in a small hall at the edge of the facility, an electric boiler, plugged with a multitude of grass-green cables, is powered by electricity generated by the engine testing.

At the same time, exhaust gases emitted during testing are captured and used to warm up water in a tank inside the testing hall. The heated water is pumped from both the boiler and the smaller tank into the larger, dark-blue tank outside the building, which Nørgaard jestingly calls the “Thermos”. From there, it travels through insulated tubes to the town’s supplier – and ultimately to homes in Frederikshavn.

Kim Nørgaard, Head of Production and R&D at the Test Center in Frederikshavn, negotiated the CHP project with Danish authorities, showing how it would benefit the community.

The idea of making production in Frederikshavn more sustainable first arose when MAN Energy Solutions wanted to build a new facility for assembling and testing big engine-generator sets almost a decade ago. “It was already clear to us back then,” says Nørgaard, “that we couldn’t build the most energy-efficient engines for our customers without making their production as efficient as possible too.” At the time, adds Nørgaard, projects like this one were still unexplored areas: “Sustainability wasn’t the worldwide trend it is today.” But the conditions were right in Frederikshavn, which as early as 2007 had approved an “Energy Town” project to exclusively produce its electricity from 100 percent renewable energy. The green cables carry surplus electricity from the MAN 175D engine test beds to a massive boiler creating hot water for use in Frederikshavn.

We couldn’t build the most energy-efficient engines for our customers without making their production as efficient as possible too.

The project in Denmark fits perfectly into the global strategy at MAN Energy Solutions to decarbonize production: “Our customers want high quality machinery made in a sustainable way,” says Dietmar Pinkernell, Head of HSE Management and Corporate Responsibility. So while the company aims to have sustainable technologies and solutions make up more than 50 percent of its revenues by 2030 – it also wants to lead by example. Taking its parent company Volkswagen Group’s environmental mission statement “goTozero” as a guiding principal, each year MAN Energy Solutions is investing millions of Euros in environmental protection and energy-saving measures at production sites all around the globe, focusing in general on four key clusters of measures that have the greatest impact in reducing carbon emissions.

First, the company is prioritizing energy efficiency at test stands and foundries. At its headquarters in Augsburg, Germany, for example, such measures have already cut around 3,000 tons of CO2 per year. Second, the company is undertaking building renovations to increase energy savings. This includes measures such as insulating the roofs and facades of seven production halls in Oberhausen, Germany, saving 840 tons of CO2 emissions per year. The large tank outside the Frederikshavn facility stores hot water before it travels through insulated tubes to heat 1,500 households in Frederikshavn. The CHP project in Denmark saves thousands of tons of carbon per year and provides heat and hot water for homes in the progressive “Energy Town” Frederikshavn.

Third, the company is generating energy in-house from low-emission sources. At its Augsburg site MAN self-generates up to 5.4 megawatts of energy with natural gas, annually saving another 384 tons of carbon. In the Czech Republic town of Velká Bíteš, the company has also switched to natural gas saving nearly 300 tons. And fourth, the company is steadily increasing the share of renewable energies, already reducing the carbon emissions of various sites by a total of 9.195 tons per year.

Such a wide-ranging effort to reduce carbon emissions requires clear, cross-site management,” says Pinkernell, “and it connects our sites into a worldwide network.” This network allows the various production sites to benefit from each-other’s know-how, which is why the company is using software to compile data on different measures to compare CO2 or energy savings. The data allows the potential of individual projects to be evaluated and the impact, as well as the costs, of measures to be compared so they can be used as blueprints for other sites. “We’ve already been able to implement measures with particularly high benefits around the world,” adds Pinkernell, “such as in Changzhou, where we’re using heat pumps to provide hot water for our shower room.”

By 2023, the company intends to establish its own energy management system, which will allow a comprehensive evaluation of energy consumption at their production sites. Hence, further efficiency improvements and emissions reductions can be targeted – and MAN Energy Solutions can steadily increase the share of renewables powering its production sites. “Within the scope of energy management, it’s important to establish a strong link between efficiency and cost savings,” says Pinkernell, “because this makes it easier to invest in the development and implementation of sustainable new technologies.”

The global sustainability strategy is already proving its worth: In 2018, MAN Energy Solutions had achieved its 2008­–2020 target of reducing CO2 emissions by 25 percent well ahead of schedule and went on to realize a 33-percent reduction by the end of the period. Now the aim is for a further 30 percent savings by 2030. “Ambitious targets,” admits Pinkernell, “but they’re important to move forward towards a carbon-neutral future.”

In Frederikshavn, of course, sustainable production is much more than feeding heat into the district heating network. “The main idea is to consume less and minimize the resources we use,” explains Kim Nørgaard. In the latest production line for the MAN 175D engine, MAN Energy Solutions has made a range of improvements such as reducing the running hours by doing more cold testing when checking the electronic system. It has not been calculated exactly, but Nørgaard estimates that, when counting the number of engine operating hours cut, “it would at least double the amount of our carbon reduction.” Additional saving measures are sorting plastic for recycling and reprocessing cooling water and oil for production.

Being early pioneers in sustainable production, the experiences from Frederikshavn continue to arouse interest, both within and outside the Volkswagen Group. At the Danish site the local district heating system allows for ideal cogeneration. This may not be possible everywhere, but Nørgaard sees potential for development. He believes, that in the future many test bed sites will move to carbon-neutral sources of power. “Our whole company structure is offering sustainable solutions to customers now,” he says. “But our production is ready for it too.” 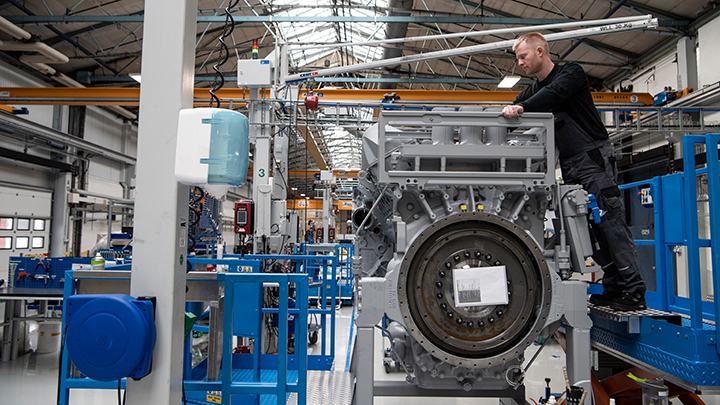 The goal behind the production of the MAN 175D engine and manufacturing other MAN Energy Solutions technology is to “consume less an minimize the resources we use,” says Kim Nørgaard.

Niels Anner is an independent journalist based in Copenhagen, who writes on business, science, technology and society in Northern Europe.