A road map to the green zone

For the shipping industry to be carbon-neutral by 2050, all stakeholders need to support the maritime energy transition. The story behind the world’s first container ship to be converted to LNG offers insights into the challenges faced, opportunities offered and pioneering drive required.

Surrounded by nine countries – Sweden and Finland to the north, Russia, Estonia, Latvia and Lithuania to the east, with Poland to the south, and Germany and Denmark to the west – the region serves as an environmental benchmark for the shipping industry, which has only been achieved by collaborating and adopting more than the minimum international standards. 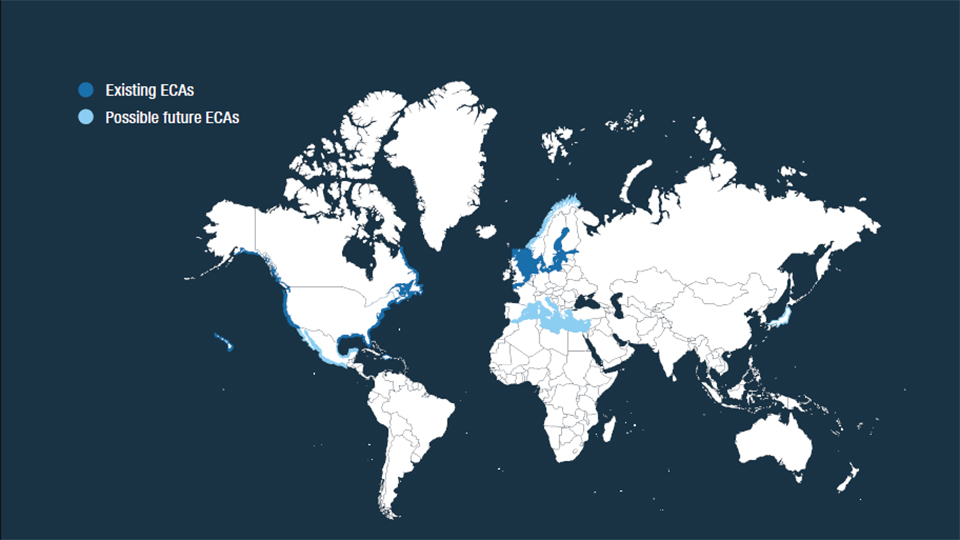 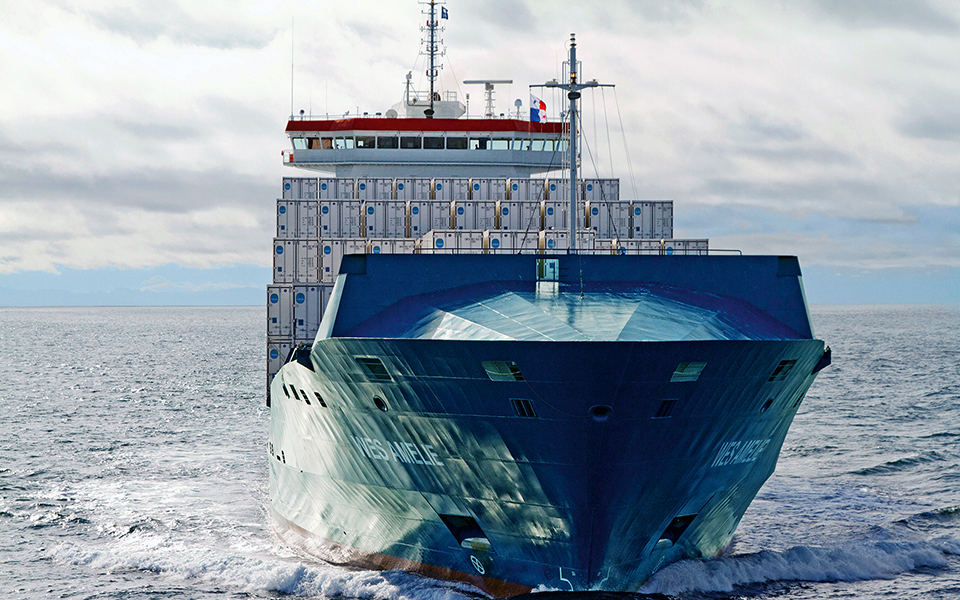 Instead of kicking the can down the road, the region has signed up to a cleaner road map for the future of shipping. And it’s a road map that MAN Energy Solutions is also committed to advancing. This commitment was recently demonstrated by the company’s pivotal role in engineering the world’s first conversion of a container ship’s propulsion system from heavy fuel oil to low-emission LNG: the Wes Amelie.

Launched in 2011, the Wes Amelie is a modern 1,000-TEU carrier, optimized for 45-foot containers, that operates in the North and Baltic Seas. Owned by the German shipping company Wessels Reederei, the vessel will be retrofitted to dual-fuel operation.

The motivation for the retrofit came from a number of directions. The first reason was regulatory, as Christian Hoepfner, General Manager and Head of Business Development & Special Projects at Wessels, outlines: “The design, construction and high ice-class parameters of the Wes Amelie meant that it is predestined for the shipping routes spanning the highly regulated North and Baltic Seas,” he explains. “As they are both within Emission Control Areas, the ships need to meet the highest environmental standards and strictest limits for emissions. By converting to a low-emission fuel, we are safeguarding the  future of this container ship as well as our own competitiveness in this market.”

The design, construction and high ice-class parameters of the Wes Amelie meant that it is predestined for the shipping routes spanning the highly regulated North and Baltic Seas.

Once it was announced that regulations would be tightened in the North Sea and Baltic Sea Sulphur Emission Control Areas (SECAs), Wessels started investigating how to maintain, and increase, the competitiveness of their container ships for charterers in this zone. Here, after 2015, all ships have to reduce emissions of sulfur oxides (SOx) from 1% down to 0.1%, and would have to eventually also reduce nitrogen oxides (N0x). What they found out: Running on LNG, the Wes Amelie would drastically reduce emissions of SOx by over 99%, NOx by approximately 90%, and CO2 by up to 20%, without the need for aftertreatment. The numbers were convincing.

The environment and expertise

The second reason for adopting LNG was more of a personal motivation to protect the environment. Basically, the choice came down to continuing with marine diesel oil with the addition of a scrubber for exhaust gas cleaning, or switching to LNG. The former was rejected, as an open-loop system would result in discharging waste water containing sulfur into the sea. So, the decision went with LNG, as Christian Hoepfner explains: “A scrubber would have been simply inconsistent with our desire for an eco-friendly operation.” The third reason was based on engineering expertise. A retrofit on this scale is not a trivial matter and requires specialist know-how, parts and implementation. The Wes Amelie was originally fitted with an MAN 8L48/60B diesel engine, one that MAN Energy Solutions had considerable experience in converting to the dual-fuel operation. Which meant MAN was the preferred partner for the task.

Driving the transition to LNG

By scheduling the retrofit during a major planned engine overhaul, the costs would also be kept lower. The parts to be exchanged are essentially all wearing parts that will have reached the end of their effective lives, and would have been scheduled for replacement anyway, by MAN PrimeServ, the after-sales division of MAN Energy Solutions. “By providing  customers with the technology to retrofit their existing fleets, including container ships, MAN is not just making a contribution to the transition to LNG-powered vessels, we are driving it,” says Stefan Eefting, Senior Vice President MAN Energy Solutions and Head of MAN PrimeServ in Augsburg. 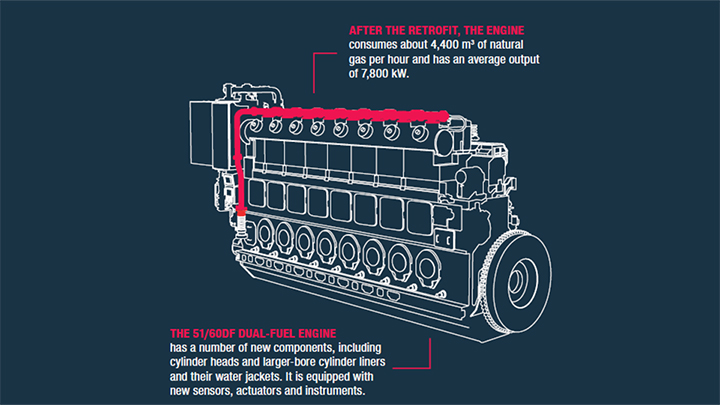 When MAN took on this retrofit, it was more than a technologically pioneering feat. It was the result of the company’s long-standing drive toward decarbonization. Back in 2015, not satisfied with the speed of the industry’s move to gas, MAN CEO Uwe Lauber was calling for a “maritime energy transition.” The initiative was created in reference to the move to renewables in the energy market, and the necessity to reach carbon neutrality by 2050, as Lauber explains. “The Paris Agreement of COP21 set the framework for future development, not only of shipping, but of all industries. The similarity is clear. Just as the technology for renewable energy generation was available, the technology necessary to use LNG as a fuel on a large scale was also there and ready. But to untie the knot that clogged the system, politics had to jump on board, too.”

A roadmap to decarbonization

In a series of press articles, public appearances and one-on-ones, Lauber has continued to outline a simple road map to drive decarbonization in shipping. In the short to medium term, it’s achieved by establishing LNG as a fuel to lower emissions. In the long term, it will require ways to generate LNG from renewable resources. Essential for all of this is the setting of global standards. “The shipping industry is global by nature, and at the end of the day, it requires regulation on a global scale. The International Maritime Organization has to ensure a level playing field,” adds Lauber. However, this does not mean that local governments should be idle: “We need a ‘new deal’ to drive this initiative, which unites ship owners, ports, shipyards, engine manufacturers, as well as politics,” explains Lauber. “All the ingredients necessary to establish LNG are there, but it is politics that need to lead the way and make the whole industry believe that this is really happening.”

This is a lesson that Wessels has had to learn the hard way, too. When the cost estimates for the conversion came in, the project almost didn’t get off the ground. From a mere economic standpoint, the case for the retroit was a tough one to argue. The solution would require an element of political commitment, too. It was the pioneering but fully replicable character of the project that convinced the German government to get involved.

The Wes Amelie has 23 sister ships, and 16 of them are structurally identical, which guarantees that similar projects could be easily implemented in the future. In addition, as a total of 82 type MAN 48/60 engines have been installed in ships of various kinds, the actual potential for retrofitting such vessels to LNG is even greater. The scalability of the engineering services and the development costs would significantly reduce the costs for all follow-up projects.

This clear multiplier effect was the deciding factor in securing additional financial support for the project from the German government via its Federal Ministry of Trans-port and Digital Infrastructure (Bundesministerium für Verkehr und digitale Infrastruktur – BMVI). Once the BMVI recognized the contribution such a project could make to the industry in the long term, additional funding was awarded. This would also enable a short, three-year amortization of the investment. Hoepfner is convinced that it was this interplay of political support, tough regulations, advanced engineering and the right attitude to environmental protection that sealed the eco-friendly deal for the retrofit: “We were there at the right time, in the right place, with the right technology and attitude,” he says.

“The time is right to engineer the maritime energy transition,” agrees Dr. Thomas Spindler, Head of Upgrades & Retroits – MAN PrimeServ Four-Stroke – MAN Energy Solutions. “But as the example with Wes Amelie confirms, it needs a broad commitment to make it fly.  Next to advanced engineering and personal conviction, pushing through with this will take better regulation and the political will to succeed. And we will keep pushing on all levels,” he promises.