A first-hand report of an hour spent in the engine room of a Royal Canadian Navy patrol ship – in the virtual world.

Testing a first-of-its-kind virtual reality training solution in the marine sector reveals a thoroughly immersive experience that comes as close to reality as one can get. The author tried not to trip over the virtual tool box.

Over Halifax, Canada, the pilot initiates the descent. "Ladies and gentlemen, we have a signal here indicating we might have a problem with the brakes... please prepare for an emergency landing," the voice of the captain comes over the speakers. The flight attendants instruct us to take a crouching position, then shout, "Brace - emergency landing!"

We hold our breath as the wheels touch down and the plane shoots along the runway. The brakes work after all, the aircraft slows down. At the exit we thank the pilot, who seems cool and collected. I wonder how often he has practiced such situations in the flight simulator as a young aviator. Has he been able to keep his cool and land us safely due to such training?

My reasons for traveling to Halifax go to the core of such questions: I am here to test a technology that will carry a modern version of what the flight simulator was for aviation into a multitude of economic sectors and professions − Virtual Reality (VR) Training. For such tasks as controlling a means of transport, loading goods or repairing an engine, the virtual space offers opportunities abound to train. In VR programs, trainees can familiarize themselves with work environments and learn how to operate machinery, as well find out how to react to unexpected occurrences that could have catastrophic consequences in the real world. 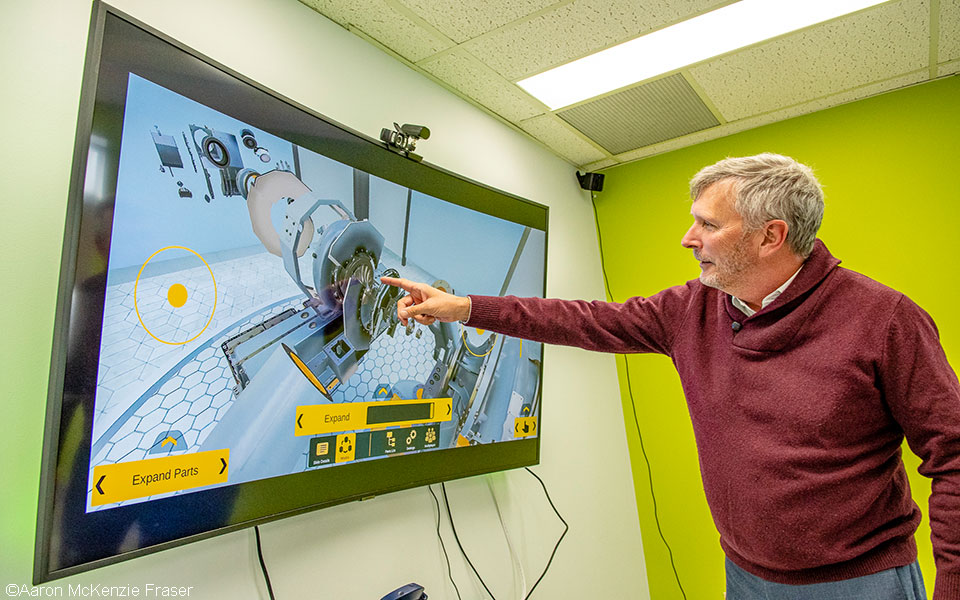 23
faults can be initiated by an instructor for a student in the VR environment.
90
frames per second run in the VR solution to make the experience really smooth 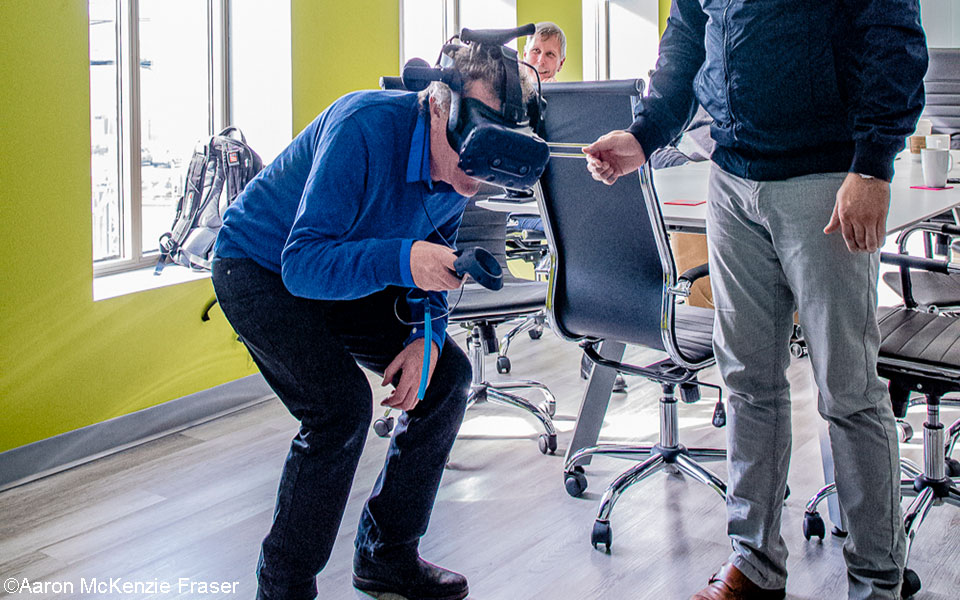 The correspondent collecting nuts and bolts in the VR engine room

More than 400,000 people live in the picturesque basin around Halifax. Over 5,000 of them are employed by the Royal Canadian Navy (RCN), which operates its largest base here, the Atlantic Fleet.

MAN Energy Solutions has been contracted by the Navy not only to provide power generation and propulsion systems for the RCN’s new Joint Support Ships (JSS), but also to come up with a VR training solution for sailors who will handle the engines onboard the Arctic Offshore Patrol Ships (AOPS) under construction at Halifax Irving Shipyard.

I meet with Rob Gair, Head of Government Services at MAN PrimeServ Canada, to test the solution that will train the men and women of the RCN to operate and maintain the ships’ engines. Rob is the main man behind this project and he will guide me through my virtual experience. “If you’ve never been involved in virtual reality before, it’s quite an immersive experience. As you move through the virtual world, you forget all external realities,” Rob says and promises: “We’ve really ramped it up.”

I am handed the gear, put on the wireless VR glasses, and pick up the controller. Upon the start of the training, I find myself in the middle of an endless plain. A pale light at the rim on the horizon suggests a sunrise. A flash, and I stand on a stairway leading into the engine room of an AOPS, equipped with two MAN 32/44 CR engines.

Rob directs me to the engine control interface, a virtual computer, used to operate the engine, as well as providing information on how the engine is performing. I start up the engine as prompted, and for now, everything seems to run smoothly. By pointing and clicking the controller to a point on the walkway, I can get to any location in the room – and beyond: While checking out the very real looking metal casing of the engine in the VR space, Rob encourages me to “just poke my head through it” and take a peek into the inner workings of the engine.

The first instinct is to resist banging my head on the metal – then some part of my brain manages to deliver the message to the neural centers that I am in a virtual space. I get on my knees and poke my head through the casing and look at the beautiful inner workings of the engine, a sight you could never get in a real environment.

I hear a change in the sound of the engine, and hurry back to the dashboard to see and hear alarms and witness the engine shutting down. The lube oil pressure is dangerously low, and Rob tells me, in an effort to move forward, that I have to replace the pump. Now, that involves a wrench and unscrewing quite a few nuts and bolts. It takes this writer, used to a keyboard and a two-dimensional screen, a few minutes to adapt to the new environment, but with the help of Rob’s comments from the real world, even I figure out how get the engine running again.

Judging by the faces I see when I take off the VR goggles and come back to the real world conference room in Halifax, it becomes evident that by no means I would make a good candidate for sailor on an AOPS in the Royal Canadian Navy, though. Was it the moment when even my friendly instructor Rob couldn’t understand why I just wouldn’t step over the imaginary VR toolbox? Or when I just wouldn’t see that a rag I forgot after cleaning the turbo charger was catching fire?

For me, those rather embarrassing moments in the virtual AOPS engine room taught me the crucial lessons of the training experience: While not everybody is suited to it from the get-go, practice makes perfect, in virtual reality, too. 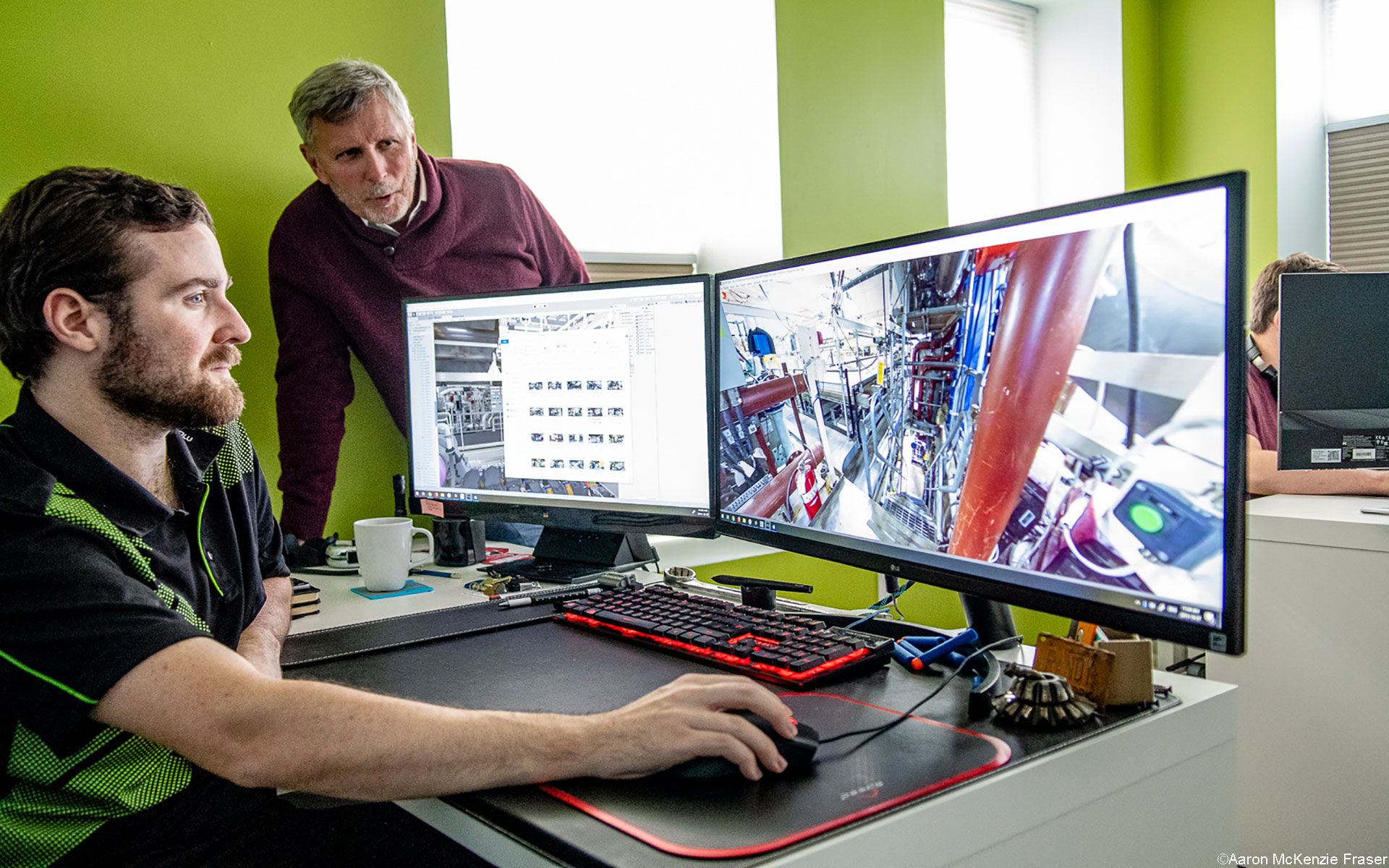 A technician explaining the VR solution.

As you move through the virtual world, you forget all external realities.

Roman Elsener is a North America correspondent for international news media since 1996. He is based in New York.

Pioneering next generation VR and AR technologies for the maritime and energy industry, MAN Energy Solutions has set up a specialist department that is taking care of target-oriented multimedia, augmented and virtual reality solutions.